A slight lapse in behaviour....

The responsibilities which go with owning one of the fastest bikes in the world began to dawn with the realisation that serious harm, either to my person or to my wallet was likely to happen if I wasn't careful. I decided to enrol on an advanced course run by the ex-chief instructor for the Ministry of Transport. It was pretty stressful (not to mention ego-damaging) in places but it was also one of the best things I'd ever done as he picked up a few less than desirable habits and proceeded to work on them with me. The most outstanding part of the course and also the scariest, was learning high speed emergency braking skills. I had visions of going over the bars or following the 'bird down the road on my arse but he improved my technique to the extent I was braking so hard that my elbows and wrists were creaking and wedding tackle was being painfully squashed into the rear of the tank. As the instructor correctly pointed out, knowing how to brake properly from high speed may well make the difference between serious harm and walking away scot-free from a hazardous situation. The course undoubtedly changed the way I ride and observe the surrounding environment, very much for the better. 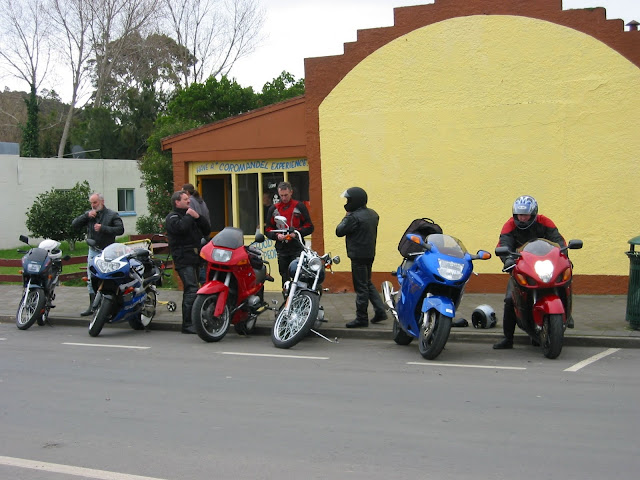 Blissfully oblivious of what was about to happen......


Ahhh... with one exception, that is! There was one subsequent occasion when some monumental stupidity nearly lead to tragedy. A number of us were out for a ride and a friend had borrowed his daughter's little RGV150. At fuel stops, we'd play "tortoise and hare", sending him off a few minutes ahead and then chase him down. Along a straight in the countryside, we spotted him in the distance and decided to go past at warp speed, which we duly did. What we had neglected to remember was some very bad ripples in the road and at an awful lot above the legal speed limit, our mate was treated to the sight of a Hayabusa, a Blackbird and a GSX-R 1000 showing a lot of daylight under the tyres. Time slowed down into a series of freeze frames and there was no fear at that moment, just a feeling of regret that I'd buggered things up completely and that tomorrow was never going to come. However, the Hayabusa and Blackbird came back down arrow-straight with the slightest of shimmies but the GSX-R was all over the road trying to buck the rider off. After stopping shortly to scrape out our leathers, we let another mate on a Harley Davidson lead us home. A lucky let-off and a serious error of judgement on our part. 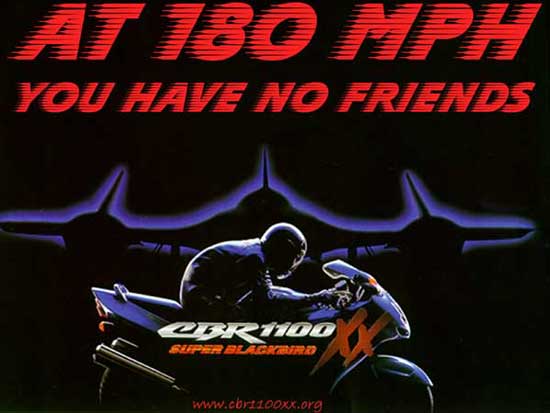 The caption says it all!