Getting back on the Blackbird after the accident made me realise that I'd become a bit gun-shy. The seat height and high centre of gravity had always been noticeable at low speeds because I'm a relative short-arse at 5'8". The fact that our house is at the end of a steep drive with off-cambers only served to accentuate the issue. Then there was the age question with the imperceptible ebb of muscle strength. Some of the thrill of riding had quietly slipped away - what was I going to do?

Jennie was pretty sympathetic to the problem as she knows how passionate I am about riding and didn't want any repeat accidents. I'd like to think it's because she loves me, but I'm pretty handy round the house too and wasn't about to get into the real reasons, haha. I got the provisional nod to get something a bit lower and lighter but what? Suddenly, the choices and permutations seemed endless. I wasn't ready for a cruiser because I'd have to grow a beard, wear a patch and spend more time parked outside the pub than actually riding so that was out. A tourer? Nope - does nothing for me. The process of paper shortlisting went on for weeks, culminating in visiting a dealer in Hamilton to look at various makes and models. Some which I thought would hit the spot left me cold (particularly the Thruxton Bonneville) and suddenly, there was one that fitted me perfectly and also had that elusive emotional "WOW" factor - the Triumph 675 Street Triple! 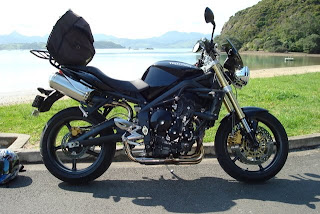 The dealer let me go for a decent ride and I was totally hooked. It may have a smaller engine than the Blackbird but its power to weight ratio and manoeuvrability is amazing! I WANT IT - I want it NOW!!! It's at this point that I should confess that Jennie's recollection of events and mine differ ever so slightly. I put this down to the difference between sexes and what constitutes a discussion. Now I thought that once the broad principles had been discussed, it was all done and dusted. Women like to pick over the detail and I must say that cost was one aspect that I may have accidentally omitted to discuss to her exacting standards. A good bollocking was followed by a fair bit of contrition on my part, with the Blackbird going to a most deserving new home in Auckland, followed by a jet black Street Triple being ridden home to Coromandel. Jennie is a real gem! 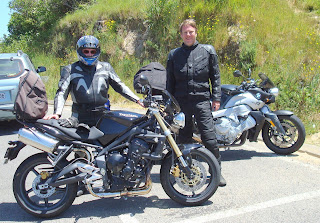 What a revelation! The Triumph is much more suited to the twists and turns of the Coromandel Peninsula and can easily hold its own with bigger bikes. Its light weight and lower height is also a colossal boost for my confidence and it's been so easy to dial into, coming from a bigger bike. There's something else too... people might question how inanimate objects like bikes can have distinct personalities, but they do! The Blackbird was a sort of "I don't have to prove anything because I can" type of bike, whereas the Street Triple is a "Who you lookin' at?" sort of bike... it's true!! Going to have to watch my behaviour on it.

Sitting indoors during a downpour a few days ago, I had one of those insidious, dangerous musings creep in. It started off like this: "Wonder what it would be like to do 1000 miles in 24 hours on an unfaired bike?" Before I'd realised what was going on, a few fuel-distance calculations had been mentally processed and it seemed quite a good thing to try, probably because the pain of previous 1000-milers have faded over time. However, the body is certainly not in as good shape as when I did it in 2003. A sensible backstop would be to email my mates to see if they wanted to enter the 2010 event, with a good chance of an "out" with them telling me to get stuffed. Big mistake.... an enthusiastic response from a few of them, a mix of innocence from potential first-timers and not wanting to be seen as wimpy by those who have done it before.

Well, guess we'd better get thinking about sticking applications in as entries are strictly limited. Also better do something about getting together for a chat and some practice rides - watch this space!
Posted by Geoff James at 14:52