In 2003, the lure of a fourth 1000-miler Grand Challenge started to surface for the most stupid of reasons. The previous 3 events on the BMW had been fairly painful experiences, even with the upright riding position. Hmmmmm.... wonder what it would be like on the Blackbird with it's almost racing crouch and greater load on the wrists? Could I last the distance? Bloody hell, it hurt all right but we got through it with about 5 hours to spare. Riding the 160-odd km home from the finish was a nightmare. The pain in the wrists was so bad that the journey had to be mentally divided up into 20 km distances to get through it. Get through one, watch the odometer for another 20 and so on until reaching home in Tokoroa! 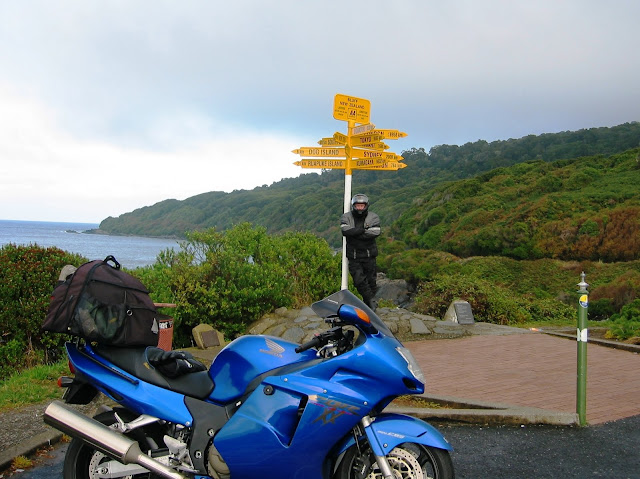 Bluff - starting point and the southermost point of State Highway 1

You'd be forgiven for thinking that the Grand Challenge was quite enough of an ordeal on the Blackbird but the need to step outside the comfort zone again surfaced by entering the 2005 Southern Cross endurance event. Covering both islands from the most northerly and southerly points, plus the most easterly and westerly points in the north island right on the edge of winter - about 4000 km in 5 days is a big ask in anyone's money, especially in bitterly cold conditions! Riding in the company of two outstanding companions in all weathers, seeing some of the most spectacular scenery in the world and finishing it on time was an unbelievable experience. It has been the highlight of 4 decades of riding. The top photo was taken at the southernmost part of the south island, where State Highway 1 runs into the sea! 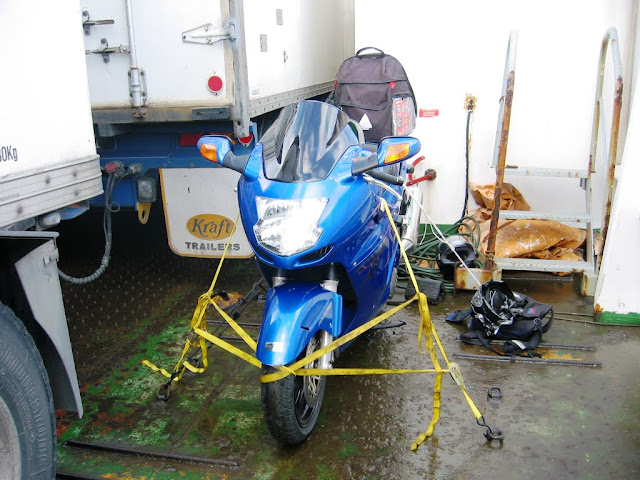 Blackbird firmly lashed down on the inter-island ferry! 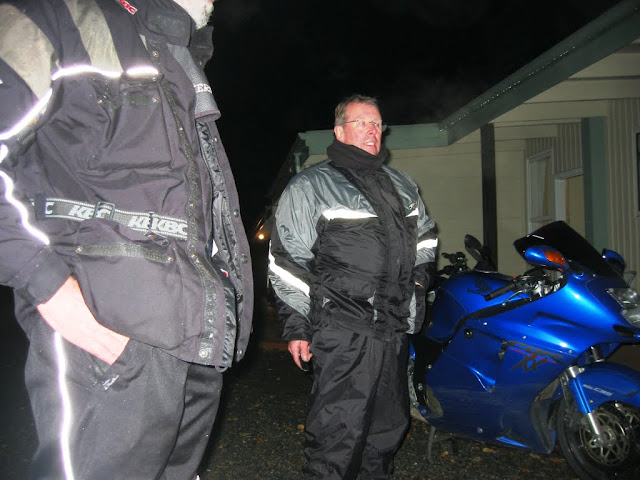 Below freezing, middle of the night and multiple layers of clothing!

I checked in to a cabin in a New Plymouth camping ground after the event around mid-afternoon.  The intention was to walk a few hundred metres to the Game Fishing club for dinner.  Whoops - I fell asleep on top of the bed, still in my leathers, door wide open and keys in the ignition.  Woke up at 7 the next morning, just about frozen solid with a massive hunger headache! A quick shower and shave plus some Panadol, then ride an hour up the road to where the region's famous whitebait fritters are served.  Breakfast has never tasted so good before or since!
Ride report: 2005 Southern Cross round NZ Endurance Ride
Posted by Geoff James at 16:24