The passion really starts to get a hold.... 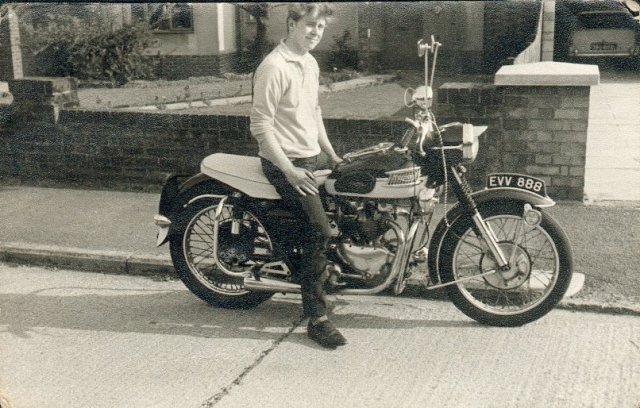 The replacement for my Triumph 3TA was yet another Triumph - a 1955 tuned Tiger 100. It was immaculate with chrome everywhere. At this point in time, big bikes fell into one of two categories: cafe racer or Marlon Brando Wild One lookalike. The Triumph fell into the latter category with raised bars, spotlights and mirrors on long stalks which folded back and trapped you at speeds greater than 80 mph! Dropped "Ace" bars were subsequently fitted which gave a significantly more comfortable ride on the open road. To be really cool, the silencers were occasionally removed for a good blast round town on straight pipes. I intensely dislike noisy "boy racers" which is a fair pointer to how the rest of the population would have felt about me at that time!

Owning early Triumphs certainly honed both mechanical and electrical skills which was quite handy for someone who was en route to becoming a professional engineer! Patience was a prerequisite, although not always in evidence. On one infamous occasion whilst fitting a new centre stand spring, the screwdriver slipped and I ended up punching the concrete floor with great force. There was an explosion of light and red mist. When it cleared, I found that I'd stabbed the seat several times with the screwdriver. It was a good insight with respect to how crimes of passion occur!

The undoubted highlight of ownership was going to the 1969 Isle of Man TT with friends. A dawn blast round the circuit in Practice Week is fondly remembered, especially for getting the drum brakes so hot that the grease in the wheel bearings started running past the seals and smoking furiously! Meeting two Scottish girls who were holidaying in the IOM was also memorable, but best left at that. The photo taken at the IOM shows the gorgeous Anne McGregor who either liked me or was colour blind as my taste in casual clothing was appalling - green knitted cardigan, orange T shirt, twill trousers and suede boots. Aaargh.... 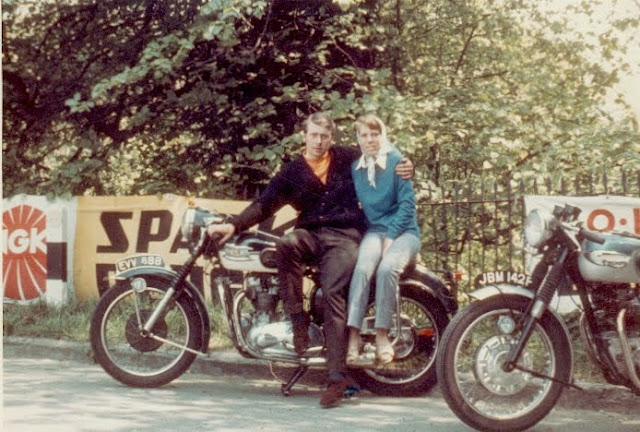 
Conclusions from this period:
Rode like a complete pillock, far in excess of my minimal ability and was lucky to live through it. Started to realise that girls weren't turned on by riding pillion in a freezing British winter and that I'd better start thinking about 4 wheels if I wanted to score or at least losing my manhood to frostbite. Moderate signs of maturity appearing although debatable from a parental viewpoint.
Posted by Geoff James at 10:58