A sucker for punishment....

After 3 years of enjoying BMW ownership, some mates and I saw an article in a New Zealand bike mag about one of their staff having taken part in something called the Rusty Nuts Grand Challenge 1000 miles (1600km) in under 24 hours ride. It's an annual event which starts and finishes at the same place but the organisers vary the route. The other thing they do to make it real fun is set most of the course on narrow, twisty back roads miles from anywhere which is quite daunting, especially during the night. The author just missed the 24 hour cutoff and was hallucinating with pain during the latter part of the ride. It was obviously one heck of a challenge so we sent in entries for the 1996 event whilst clearly in a deranged state of mind.

The weather was shocking with horizontal rain and gales for much of the ride, it was scary and we were in an awful lot of pain at the finish and for some days afterwards. However, the feeling of finishing within the 24 hours was indescribable and we had every right to feel proud. Whilst the physical challenge was bad enough, the battle with one's own mind not to give up was equally strong. Everyone swore that they'd never do another one but in this comfortable and largely predictable age, challenging oneself becomes addictive. Two more Grand Challenges were undertaken on the Beemer in 1997 and 1999, one of them being completed in 18 and a bit hours. However, because the weather and route plays such an important part, all everyone can hope for is finishing safely within 24 hours. 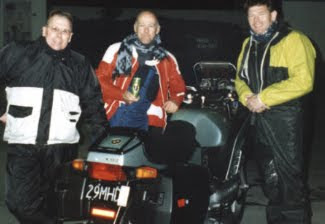 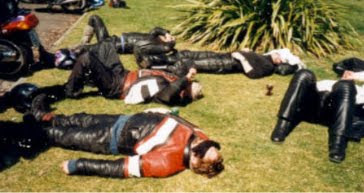 Are we getting a bit old for this, chaps?

It was whilst owning the BMW and becoming accustomed to riding reasonably fast that I did my one and only runner from the law. The exact circumstances are better left undocumented but I got away with it, having scared myself witless in the process; shaking so badly when finally stopping that it was difficult to hold the bike upright. A salutatory experience and never to be repeated.

A confession to Jennie (in case my number plate had been more visible than first thought) brought forth a bollocking of truly biblical magnitude. This was followed up by another one from our daughter who takes after her mother. I'd like to think that our two sons were secretly chuffed although nothing was said because they know full well who rules the household.